Guiding Students on an Inquiry Journey

What is Your Vision for the Future of Education?


Inspired by Jane McGonigal's SXSWedu "How to Think Like a Futurist" keynote.

Combine Signals into a 10-year Forecast 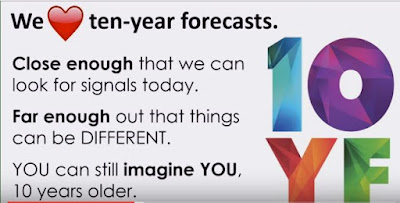 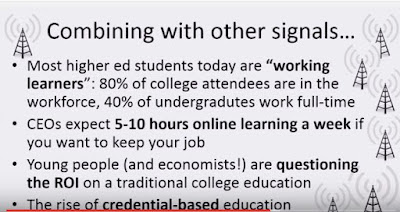 What is your personal foresight  for the future of education?   What are the positive and negative implications?
No comments:

The adequacy of response rates to online and paper surveys

Abstract:
This article is about differences between, and the adequacy of, response rates to online and paper-based course and teaching evaluation surveys. Its aim is to provide practical guidance on these matters. The first part of the article gives an overview of online surveying in general, a review of data relating to survey response rates and practical advice to help boost response rates. The second part of the article discusses when a response rate may be considered large enough for the survey data to provide adequate evidence for accountability and improvement purposes. The article ends with suggestions for improving the effectiveness of evaluation strategy. These suggestions are: to seek to obtain the highest response rates possible to all surveys; to take account of probable effects of survey design and methods on the feedback obtained when interpreting that feedback; and to enhance this action by making use of data derived from multiple methods of gathering feedback. 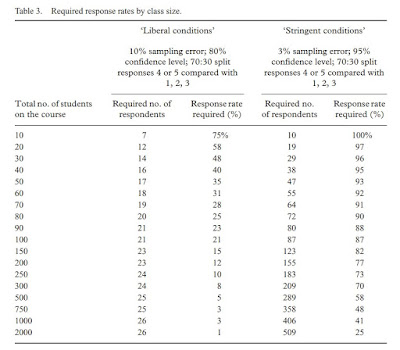 Typical Response Rates for Common Survey Types
Surveys that you distribute internally (i.e. to employees) generally have a much higher response rate than those distributed to external audiences (i.e. customers).

To help improve your survey response rate keep these key factors in mind:

2. Provide Clear Value: Offer a copy of the final results to all those who complete the survey, and, if appropriate, consider offering an incentive. If you plan to take action based on the results of your survey, make those clear in your survey invitation. Remember, people will be more likely to respond if they understand how that time will be spent.

3. Send Reminders: As the close of your survey approaches, gently nudge those who haven’t finished yet. Limit yourself to no more than two reminder emails, changing the time of day and the day of the week that you send them out so that you can reach as many different respondents as possible.

When it comes to probability surveying, creating a sample size should never be left to guessing or estimates. Instead, it should be based on three criteria:

The size of your target population: This refers to the total amount of people that are eligible to participate in your survey. For example, a study on Ontario citizens’ sleeping habits would have a population equivalent to that province’s population (13.5 million). In many studies it will be impossible to know how many people make up a population. If this is the case, it is accepted among researchers to use a fake population size of 20,000 or larger.
Your desired confidence level: Usually placed at a value of 95% in surveying, the confidence level describes how sure you can be that your results are correct. With a 95% confidence level, a researcher can be certain that the value of any sample will fall in the range of the margin of error 95% of the time.
Your allowed margin of error: Margin of error depicts the random sampling error that is possible in the study. This is important because it is impossible to know whether a sample’s results are identical with the true value of the population. The value allotted to the margin of error describes the range in value that the population may have based on the results in the study. This is always described as a plus or minus value.

Graduate students frequently wonder whether they can use first person pronouns when writing academic papers. Below is a brief guide that students can use to determine when and why writing in the first person is acceptable or not.

"First-person pronouns are acceptable in limited contexts. Avoid their use in rote descriptions of your methodology (“We performed the assay…”). Instead, use them to communicate that an action or a decision that you performed affects the outcome of the research."

The Scientist’s Handbook for Writing Papers and Dissertations argues that in using the third person, the writer conveys that anyone else considering the same evidence would come to the same conclusion. The first person should be reserved for stating personal opinions.

Good Style: Writing for Science and Technology2 is also against use of the first person in scientific writing, explaining that “readers of scientific papers are interested primarily in scientific facts, not in who established them.” However, this book also points out that there are points in scientific papers where it is necessary to indicate who carried out a specific action.

In Eloquent Science, Dr. Shultz concludes that “first-person pronouns in scientific writing are acceptable if used in a limited fashion and to enhance clarity.” In other words, don’t pepper your paper with I’s and We’s. But you don’t have to rigidly avoid the first person either. For example, use it when stating a nonstandard assumption (“Unlike Day and Gastel, I assumed that…”). Or use it when explaining a personal action or observation (“We decided not to include…”). Finally, follow the conventions in your field, and particularly check that the journal you intend to submit your paper to does not specifically ban the use of the first person (as a handful of journals do).

The primary objective of the EdTech internship is to provide graduate students with an opportunity to develop their understanding of the educational technology industry and educational entrepreneurship while applying their knowledge of educational research and theory to innovative technology products that seek to address the challenges of the 21st century classroom.

This objective is achieved by providing interns with a field placement with EdTech companies that have an existing relationship with the Niagara Educational Research and Innovation Hub (ihub).

Pairing EdTech entrepreneurs with interns that are pursuing a Masters degree in education provides these companies with the educational insight needed to ensure that their products address the needs of educational practitioners while also ensuring these products are informed by best practices and current educational research.

A secondary goal of the internship is to support knowledge mobilization. As such, the interns are required to use a variety of social media resources to share their expertise and insight. Their blogs and Twitter accounts documents their experience throughout the internship while the culminating podcasts highlights their overall experience and understanding of working in the EdTech industry as well as their research pursuits and predictions for future EdTech products. 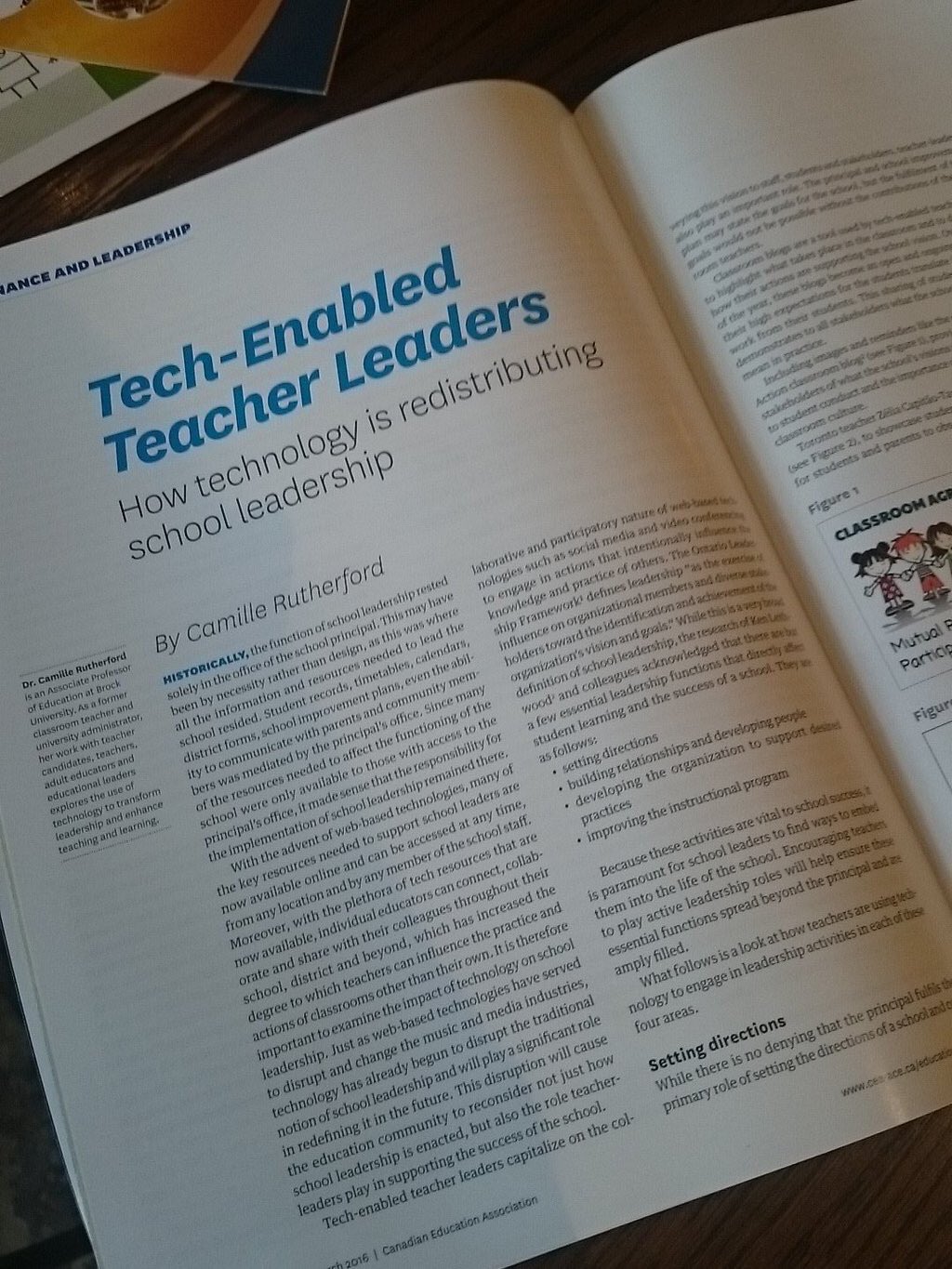 Similar to the way technology is transforming classroom practice, the use of technology has begun to disrupt traditional notions of educational leadership. This disruption will cause the education community to reconsider not just how school leadership is enacted, but also the role teacher-leaders play. With the plethora of tech resources that are now available, individual educators can connect, collaborate and share with educators throughout their school, district and beyond. In this article, the author examines how tech-enabled teachers from across the country are using a variety of technological resources to redistribute educational leadership and enhance the role teachers play in supporting the success of their schools and their profession.

Social Media can be a thriving digital habitat for finding your voice, curating your disciplinary interests, track cutting-edge research and seek out trail blazing professionals within your field. Learn practical strategies for management, engagement, reach and impact that just may turn a ‘mild’ interest into a ‘wild’ interest.

Tech-enabled leadership, that capitalizes on the affordance of social media, may be able to further enhance the distribution of leadership influence by significantly increasing the number of people who influence the knowledge, practice or motivation of organizational members. 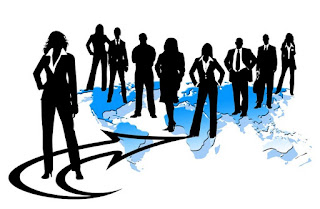 Technology can serve to activate leadership influence by increasing the opportunities for organizational members to interact with each other. Despite the number of members that may be part of an organization or profession, busy schedules that limit in-person interactions, frequently contributed to professional isolation. Technological resources, that allow users to interact, collaborate and exchange ideas and resources without the need to be in the same location, at the same time, can be used to overcome some of the challenges of professional isolation. Social media resources that facilitate asynchronous discussions allow educators to interact even though they may have widely differing schedules.

Tech-enabled teachers have the potential to redefine educational leadership and the role teachers play in supporting the success of their school and the profession.

For the past four years, we've travelled to Orlando to attend the FETC. This year we had a large group of nine that included graduate students, technology specialists and startups founders. As we do each year, we created a podcast to share the insight gained from attending the conference.